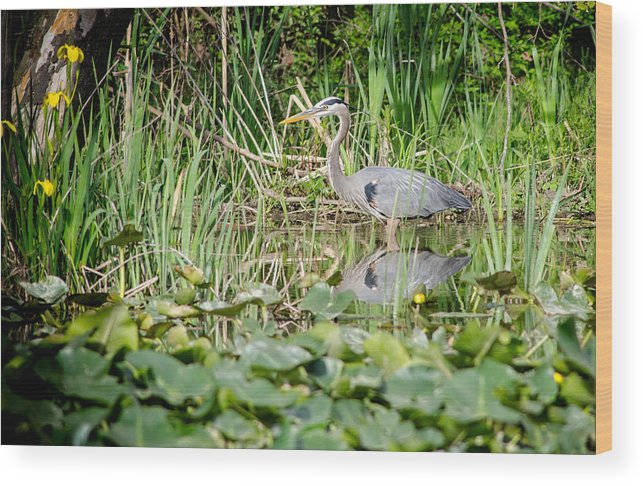 Heron and Lilypads wood print by Matt Hammerstein.   Bring your artwork to life with the texture and added depth of a wood print. Your image gets printed directly onto a sheet of 3/4" thick maple wood. There are D-clips on the back of the print for mounting it to your wall using mounting hooks and nails (included).

Cuyahoga Valley National Park, established in 1974, protects and preserves 51 square miles of rural landscape along the Cuyahoga River between... more

Cuyahoga Valley National Park, established in 1974, protects and preserves 51 square miles of rural landscape along the Cuyahoga River between Cleveland and Akron, Ohio. It was designated a National Park in 2000. The Cuyahoga Valley began providing recreation for residents of nearby urban centers as early as the 1870s. In the early twentieth century, the area began to be formally preserved under the Cleveland and Akron metropolitan park districts. The park’s primary attraction is its many miles of hiking and biking trails, including portions of the towpath trail of the former Ohio and Erie Canal. The park also features some of the best scenery Northeast Ohio has to offer, with rolling hills, winding rivers, cliffs, caves, and waterfalls. There are several preserved historic structures, as well as two winter ski resorts. Here, a great blue heron is seen hunting fish in one of Cuyahoga Valley National Park's many marshes. These large birds are a common sight in the park.

Follow on Instagram @mhammersteinphoto I have enjoyed photography ever since I was young; I have always wanted to get my hands on a camera and take pictures when I see one. When I was 10, I saved up some money and bought my first camera, a Kodak point and shoot. I was instantly hooked. Today, I am enjoying photography as a side endeavor while I pursue a degree in civil engineering. I enjoy producing architectural, nature, and landscape images, especially while hiking and traveling. Many of my images are from trips taken to many parts of the United States. I have galleries featuring photographs of many locations and a wide variety of subjects. Any would look great and provide an eye catching conversation piece for homes, offices, or...